When Is It Okay To Mine Hacked Emails? 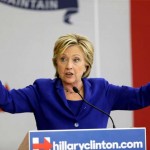 WikiLeaks: Podesta Asks Clinton’s Lawyer, ‘Think We Should Hold Emails To and From (Obama)?’

WikiLeaks released yet another batch of hacked emails from inside Hillary Clinton’s campaign Wednesday, and with them came another round... View Article

The Military Is Building an Employee Database to Predict Traitors

The “DoD Component Insider Threat Records System” is part of the U.S. government’s response to the 2010 leaks of classified... View Article